Warning: Parameter 1 to wp_default_scripts() expected to be a reference, value given in /web/htdocs/www.ullgerchambers.com/home/wp-includes/plugin.php on line 601
 Louise-Anne | Ullger Chambers 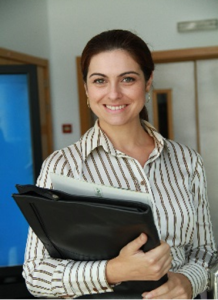 Louise-Anne (or Louise as her friends and family refer to her), is a fully qualified barrister and member of the Inner Temple. She was called to Bar of England and Wales in 2007 and subsequently called to the Gibraltar Bar in 2008. Since her call to the Bar in Gibraltar, she has worked as part of a legal team in one of the ‘big four’ accountancy and financial service providers where she gained experience in company, trusts, commercial and tax matters. During these formative years, she was promoted to liaise directly with the board of directors on commercial projects and was given the opportunity to travel and represent the firm at several legal conferences. She was also seconded to the firms’ partner offices in London to develop her legal training.

Louise further enhanced both her legal and managerial skills since joining an established freight forwarding group of companies with registered entities in both the UK and in Gibraltar, as both their in-house legal advisor and as part of the management team. She used her previous gained experience to keep legal matters in-house by offering the board of directors’ advice on a wide range of subjects concerning the group, including; commercial, property, HR and employment, insurance and transportation. She has also negotiated and finalised commercial and freight forwarding contracts and has mediated/resolved internal HR-employment matters amicably without resorting to litigation. Most recently, Louise has been instrumental to the group of companies with preparations for Brexit, having close liaison with HM Customs Gibraltar, HM Customs UK, HM Government of Gibraltar, DEFRA UK and customs agents throughout Europe. She is known for her upbeat personality,  is a great problem solver and has successfully lead a team of 24 employees.

Since joining Ullger chambers, Louise looks forward to further her legal career by having the opportunity to offer her legal services to members of the public.